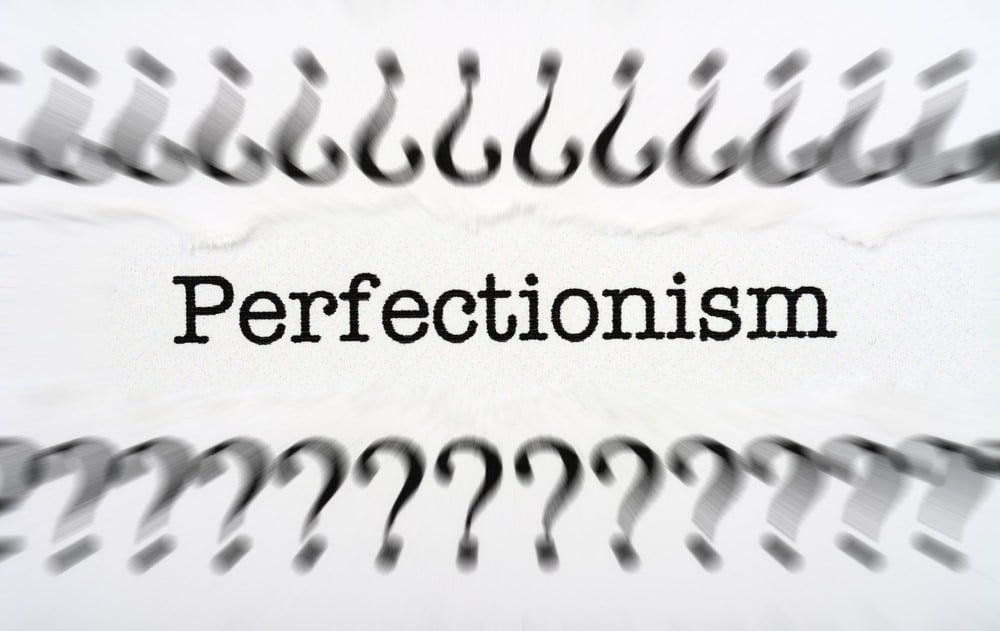 I can recount many instances of where perfectionism dominated my life during my formative years.  It’s also impacted me during early recovery.  In fact, in early recovery, perfectionism really reared its ugly head with my pursuit of perfect physical appearance (a really awful form that unfortunately afflicts many people).

Fortunately, as I progressed in my recovery from alcoholism, I also enjoyed a release from harmful perfectionism.

Some perfectionists, including me in the past (see distinctions below under “What is perfectionism?”) live in a fear-based state of mind resulting in shame, grandiosity, procrastination (self-oriented perfectionists [1]) and/or addiction.  This was me.

Wikipedia gives a terrific account and definition of perfectionism.  What’s interesting, is there’s a school of thought that there are 3 types:

There is no doubt in my mind that I had the neurotic form.  In fact, in sobriety my perfectionist concern exploded with respect to my health and appearance.  I became neurotic about my appearance for about 1 year.  Interestingly, neurotic perfectionism regarding physical appearance is extremely widespread and common … so widespread that there’s an actual term for this form of perfectionism called “The Physical Appearance Perfectionism Scale (PAPS).”[4]

It’s not surprising that many alcoholics are also afflicted with perfectionism (the unhealthy kind).  In fact, ironically, some alcoholics in recovery doing 12 step programs struggle with trying to do the 12 steps perfectly (an impossible task … what is perfect?).

I have self-oriented perfectionist tendencies.  It’s not a good trait to live with.  I’ve worked very hard on mitigating my perfectionist mentality.  I truly live by “good enough is good enough”.  Fortunately, I’ve been released a great deal from having to do things perfectly.  It’s very relieving.  Before I sobered up, alcohol was my temporary solution.  Since getting sober, I actually dealt with my insanity which addressed my many “isms” including perfectionism.

In fact, perfectionists (probably mostly self-oriented perfectionists) abuse alcohol and drugs because mind-altering substances (and perhaps other addictions) are a release from the ever-present grip of perfectionism.

The similarity in negative emotional states between self-oriented perfectionists and alcoholics is uncanny.  Both “isms” involve some or all of the following:

Note, I’m not saying my perfectionist tendencies caused my alcoholism … it’s likely part of the mix of factors that resulted in me becoming a drunk.  Moreover, not all perfectionists are addicts.  Not all addicts are perfectionists.

Is perfectionism all-or-nothing or does it impact people differently?

In my experience, you can be a perfectionist in degrees.  Some people suffer with perfectionism to such a degree that it’s totally debilitating, while other people exhibit tendencies.  It’s also important to understand that there are healthier forms of perfectionists (see above “What is Perfectionism?”)  Fortunately, I’ve had a milder form of perfectionism … but it’s a mild form of self-oriented perfectionism (the unhealthy form).

One of the most common job interview questions is “what is your greatest weakness?”  It’s a dumb question, but it’s asked a lot (I’m not a psychologist or human resources expert so maybe there’s more to the question than I understand).

Anyway, some people play it safe, so they think, by responding with “I’m a perfectionist.”  This response is a joke.  It’s a common response because perfectionism the applicant believes they can pawn off the answer as a weakness, hoping the interviewer is duped into thinking “actually perfectionists are great because the do good work.”  The opposite is true.  Employers aren’t stupid and see through this ruse … if a person is a neurotic perfectionist, employers don’t want to hire them because of all the emotional baggage they bring to the workplace (procrastination, depression, addiction, inability to delegate, not team players …).[5]  In a nutshell, trying to pass off perfectionism as a positive trait is not smart.  Maybe it worked for the first person who used it (it’s clever the first time), but now it’s a bad cliche.

Alcoholism has more to do with “ism” than alcohol

Simply putting a plug in the jug doesn’t mean you don’t stop suffering.  The “ism” part, while different for every alcoholism, must be dealt with in recovery in order to have long and happy sobriety.

Perfectionism also has an “ism” component.  There are underlying emotional issues that drive people to neurotic insanity in having to be perfect or do things perfectly.  When addressing both alcoholism and perfectionism, one must treat the “ism.”

How does one treat perfectionism when drinking isn’t an option?

We alcoholics drink for relief.  If we’re neurotic perfectionists, we seek relief from the ever-present fear of failure and the fallout from failure (ridicule and criticism) which hammers away at our self-esteem.

But, if we stop drinking, how can we treat neurotic perfectionism?  I’m not a doctor or psychologist, but I can tell you what I did and do.  I’m not cured of my alcoholism or perfectionism; I merely enjoy a daily reprieve.

Fortunately, an effective recovery program for alcoholism treats other emotional disorders such as perfectionism.  It’s a long process, but the fact recovery is treating the “ism” means you don’t just treat the obsession to drink alcohol.  It’s a holistic approach to heal damaged emotional states … and this is the only way recovery will succeed.

The following are the steps I took to stop being a perfectionist in recovery from alcoholism:

1.  I applied the first 3 steps of the AA 12 steps to my perfectionism

Note, you can’t do the steps perfectly.  Don’t try.  Just do them as best as you can.  Don’t delay because you’re waiting “for the right time.”  The right time is now.

I do my best not to use this approach to justifying bad work.  However, the “good enough is good enough” maxim along with “don’t let perfect be the enemy of the good” maxim really do help me get things going and to be objective what I really need to do and the lengths I need to go.  The fact is most things in life are made more difficult in our heads, but aren’t difficult to do sufficiently.

The key here is to trust yourself that you will do a good job and that it will be good enough.  However, mistakes will be made, and that’s okay.  I’d rather try and fail than be paralyzed with non-action for fear of failure.  In the long run making mistakes is great because I learn from them and eventually get it (whatever the task at hand is) done right.

I didn’t really take any concrete steps to embrace “good enough is good enough.”  I just made a decision to live this way instead of trying to be perfect.

Take this blog as an example.  Once upon a time I’d probably still be working on design trying to make it look perfect.  With my “good enough is good enough” mentality, I simply uploaded a template design and started writing. I was able to launch the blog in 1 hour.  You don’t care whether it’s the most beautiful website you’ve ever visited … you simply want to read helpful, entertaining and concrete information about alcoholism and recovery by another alcoholic.

In early recovery, I meditated a lot.  I still meditate, but not as often.  Meditation provides me relief from thinking.  I get a mental break, which is very refreshing.  Meditation didn’t solve all of my problems or enlighten me … but it helps me be more comfortable in my own skin.

4.  Accept and embrace that life is chaos, messy, ugly … and that’s normal

Life isn’t supposed to be orderly, systematic, safe and totally predictable.  Life is nuts.  Sure there are patterns and routines, but don’t rely on it.  Embrace the chaos of life.

As I write this post, my wife and I just moved.  We have a 14 month old son.  We have money pressures.  Our home is a mess with boxes.  Life is nuts, yet I love it (not always, but most of the time).  When you can embrace and appreciate chaos and challenges, life becomes so much sweeter.

I think in our society we mistakenly strive for orderly and organized lives of perfection.  An immaculate home, immaculate bodies, the perfect job, beautiful car, yada yada yada.  The fact is a home is never perfect, you’ll never attain a perfect appearance, the perfect job doesn’t exist, there are always new cars being made.  All this stuff is just stuff and doesn’t matter.

I’ve made tremendous progress in letting go of outcomes.  I’ve invested a great deal of energy and time in my recovery to work on letting to and living in acceptance.  This effort has helped me let go of outcomes which has tremendously helped reduce my self-oriented perfectionism.  I still work hard, but do so pursuing the good instead of being driven by fear.

6.  Therapy.  Therapy can help.  I never did therapy so I can’t provide a personal account of how it helped me … but if you continue suffering with perfectionism, therapy may be the help you need.

7.  Medication.  In early sobriety, I took anti-depressants which helped me stay sober.  If perfectionism is ruining your life in recovery, see a doctor and/or therapist.