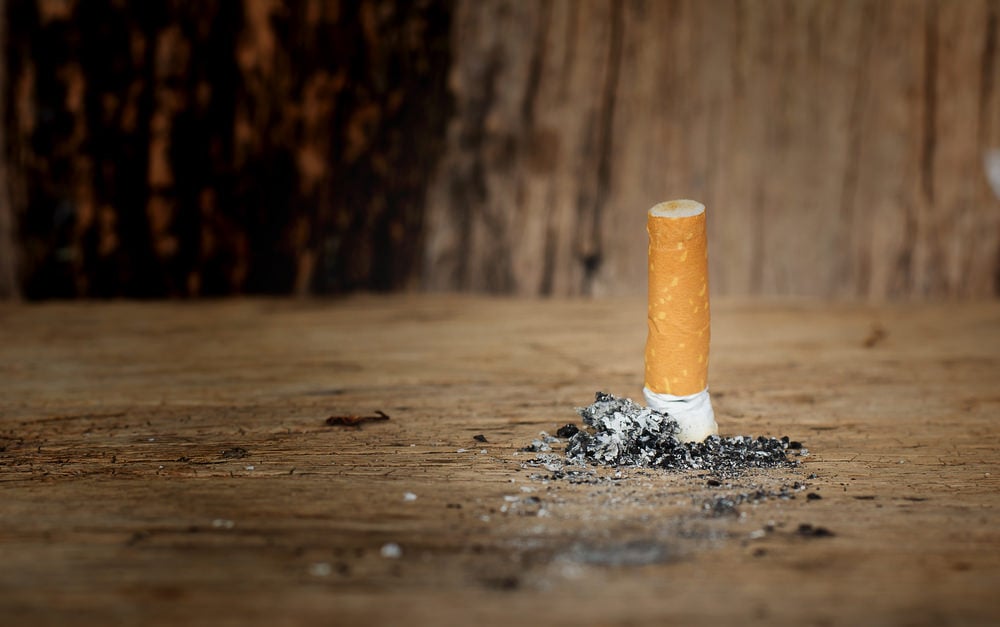 When I drank I smoked … a lot.  I had one to two cigarettes for every drink, which resulted in me smoking nearly a pack (sometimes more) during any given drinking session.

As if hammering my liver wasn’t bad enough, I sucked back smoke and carcinogens like it was going out of style.  Yes, I was on a fast track to disease and illness.  Fortunately I quit both drinking and smoking … but I didn’t manage it at the same time.  I tried quitting both smoking and drinking at the same time, but I had a hard enough time putting down the bottle, so abandoned trying to quit both and focused on quitting drinking first.

That said, I know recovering alcoholics who managed to quit both at the same time.  It’s not impossible.  It’s not a bad idea, but it does have it drawbacks.

Pros of quitting both at the same time?

For me the pain was just too much so I quit drinking first followed by smoking.

3.  Apply quitting techniques to both addictions at the same time

If you’re in the throes of quitting drinking, doing the 12 steps, you can do the 12 steps for both addictions at the same time.

Drinking and smoking cigarettes costs a fortune.  When you quit both, you’ll save that much more money.

1.  Too much too soon = Risk relapsing

This was the con that persuaded me to deal with my drinking first and smoking later.  However, I was in my twenties so I figured I could smoke for a couple more years with minimal risk.  Yes, I know smoking at any age is bad, but I made this decision and it worked.  It would have been worse had I failed at both and was still drinking.

There aren’t any other real cons.  It’s the risk of falling off the wagon (for drinking that is) that’s the big risk.

I know when I first got sober, I expressed wanting to quit smoking cigarettes to friends in AA, but was counseled by many to take it one step at a time and to lighten up on myself.  I realize being advised or giving advice to continue smoking is bad health advice, but it really boils down to a potential cost/benefit analysis.  If there’s a real risk of going back to boozing, then quitting both addictions at the same time is not worth it.

Please keep in mind that I failed at quitting drinking and smoking at the same time.  I quit drinking first, then quit smoking.  In fact, I smoked for quite a while after I stopped drinking (about 4 years).  That said, I did have brief stints of no smoking shortly after getting sober, but I would relapse on the smoking, but managed to stay sober.

As I tried to quit both at the same time, I viewed smoking as a security blanket.  When I felt agitated and wanted to self-destruct by getting hammered, I’d smoke.  That did it and that’s why I didn’t manage to successfully become a sober alcoholic and non-smoker simultaneously.

That said, it’s not impossible.

The following are some tips on how to quit both smoking and drinking:

1.  You really have to want to quit

When I quit drinking I wasn’t ready to quit smoking.  That’s the crux of it for me.  I knew I wanted to quit drinking and I did, but smoking would have to wait.

In order to quit habits as addictive as smoking, you really have to want it.  Period.  If you don’t, it’s very difficult to quit.

For me, quitting drinking took priority over quitting smoking.  I figured if I started drinking again, I’d never quit smoking (plus invite a whole host of additional problems).  Smoking didn’t ruin my life like drinking.  Therefore, if drinking is your priority addiction to deal with, be mentally prepared, if you absolutely must, to smoke again if it’s that or drinking.

That said, you will want to consult a medical professional whether you have any pressing medical issues that require you to quit one or the other immediately.  Always listen to your doctor.  I am NOT a doctor so please take what I say only as information based on my personal experience.

When I finally did quit smoking, I had the most success with nicotine gum and electronic cigarettes (note that e-cigarettes are not proven as a smoking cessation aid and I don’t claim that they are … I used them for those teetering moments and socially).  Nicotine gum worked for me.  I tried the patch, pills (Wellbutrin and Champix) and cold turkey.  In fact, I still chew the gum and have the occasion tug on an electronic cigarette.

Nothing motivates getting healthy by getting fit.  When you put effort into weight lifting, running, yoga, or a sport, you’ll be motivated to progress.  Smoking hurts performance so pursuing a physical activity is great motivation for successfully putting down the cigs.

This was a huge impetus for me in my finally succeeding with becoming a non-smoker.

When you stop smoking, don’t go hang out with the smokers at work or at social events.  It doesn’t take long until you bum one.  I’ve fallen into this trap more times than I can count.

If you simply can’t avoid hanging out with smokers, get an electronic cigarette and/or bring gum.  These are crutches, but they just might keep you cigarette-free.

There are all kinds of self-help literature for quitting smoking.  I didn’t go down this route exactly.  I read some more general self-help stuff; nothing specific to smoking.  At the end of the day it can be helpful and motivating … but you really have to want to quit.

If you decide you don’t want to stop drinking and smoking simultaneously, which should you stop first?

You can get therapy, acupuncture, hypnosis therapy … all designed to help you stop drinking, smoking or both.   There are many professionals in these fields.  I never pursued this avenue, but I know ex-smokers for whom it worked.  This treatment may help with quitting drinking as well.

8.  Apply the 12 steps to smoking cigarettes

If the 12 steps help us quit drinking, there’s no reason they can’t be applied to smoking.  In fact, there are “nicotine anonymous” groups you can join.  If you buy into the AA way of getting sober, you might find it helpful for stopping smoking cigarettes.

Ironically, I never attended “nicotine anonymous”.  I still occasionally take nicotine in the form of gum and the very occasional e-cigarette.

If you don’t want to quit drinking, how do you quit smoking while drinking?

I think I attempted to quit smoking while drinking a few times.  It was a hopeless cause.  Once impaired, I didn’t care and I’d go buy a pack of smokes.

However, for the non-alcoholic folks who don’t drink to excess and have no need to quit drinking, quitting smoking is a good idea … but it’s still tough.

Basically, you need a quit smoking plan (see tips above under tips how to quit both smoking and drinking).

Additionally, you may want to stop drinking for a while to build up some non-smoking time and momentum.  But if that’s not going to happen, use a crutch such as gum, the patch or even an electronic cigarette.

Is it harder to quit smoking or drinking?

I’ve pondered this question over the years.  It’s a tough one to answer.

It took me fewer tries to quit drinking than quit smoking.  It also took me longer to quit smoking.  The reason for this (for me) is that smoking didn’t have the immediate horrible effects on my life.  I was a blackout drinker which caused me problems that were real.  In a nutshell, drinking made my life far more unmanageable.

For example, one cigarette didn’t have any immediate consequences.  However, one blackout could (and often did).

However, had I been warned that if I continued smoking that I’d be dead in 3 months, I’m sure that would prove to be a very strong motivator to quit then and there.

Both addictions had me in their grip big time.  It just boiled down to getting to a place where I wanted to quit badly enough … and it took me longer to get there with smoking than with drinking.

That said, I used and still use a smoking cessation aid.  Honestly, the nicotine gum made quitting smoking not so bad as long as I maintained my motivation for quitting.  There really aren’t any quit drinking aids other than cold turkey, AA, etc.  What I mean is there aren’t aids that smooth out the pain as acutely and as immediately as nicotine products.

Yes, AA worked for me, but it took time for me to stop being a white-knuckler.  Yes, there are prescription pills you can take to ease the pain (anti-depressants, sleeping aids, pain killers, etc.) but that still doesn’t 100% ease the pain and can create new problems (side effects, addiction, etc.).  Whereas smoking cessation aids, while they do deliver nicotine which isn’t harmless, don’t really have any significant side effects (although I didn’t do well on Champix so I quit that within 3 weeks).

Quitting any addiction can result in physical danger.  If you experience any discomfort when stopping drinking and/or smoking, visit your doctor or go the hospital.  In fact, when dealing with addiction, it’s suggested you do so under the guidance of a medical professional and/or team of addiction specialists.